In my first “fact check” of Dr. Ray Peat, I had discussed the mechanisms by which insulin exerts its effects from the conventional textbook point-of-view.  I’ve gotten mostly good feedback on that post, and some idiotic ones, from the people who obviously didn’t take the time to read it, or if they did failed to understand it.

This lipid product, PI 3,4,5 P3 thereafter activates the kinase, PDK1, and PDK1 phosphorylates and activates Akt, another kinase that moves throughout the cell’s cytoplasm, executing most of insulin’s actions, the most important of which for this post is the translocation of the glucose transporters from the cytoplasm to the plasma membrane.


This complex insulin-signaling cascade, which I’ve simplified a great deal, is obviously dependent on an intact plasma membrane that’s impermeable (or semi-permeable) to glucose, as well as glucose transporter proteins that are ready to be called into action at a moment’s notice. (Others like Roden et al. have even gone as far as to suggest that the passage of glucose through the plasma membrane is, inherently, the rate limiting step in the use of glucose [Roden, 2004].)  There are a few issues with this scheme.

For one, in the absence of insulin, glucose freely passes through the plasma membrane and into the cell’s cytoplasm, such that at equilibrium, the glucose concentration inside the cell is 20 to 30 percent of the glucose concentration in the blood (Randle & Smith, 1958a, 1958b).  Two, the evidence that there’s a defect of sorts in the glucose transporters in diabetes is conspicuously sparse.   And three, glycogen tends to accumulate in insulin resistant tissues, indicating a block on glucose use downstream of the glucose phosphorylation step upon arrival into the cell by way of the previously mentioned glucose transporters (Sakamoto & Holman, 2008).

So the impairment of glucose use is taking place inside the cell, rather than at its border, in which the glycolytic enzymes operate.  Dr. Gilbert Ling believes, and has shown in a series of experiments in the 1950s and 1960s, that the rate at which glucose moves into the cell’s watery interior is governed by the availability of glucose “adsorption sites” on certain proteins and enzymes.  The plasma membrane has little to nothing to do with this process.

Insulin, in Dr. Ling’s sense, functions a an cardinal adsorbent, which is basically any substance (e.g., hormones and drugs) that interacts strongly with proteins at very low doses (i.e., potent), changing the protein’s electronic state; this electronic perturbation, so to speak, in turn is transmitted like dominoes to the rest of the protein and other proteins.  The proteins unfold a bit as a result, exposing their glucose adsorption sites, which preferentially bind glucose over other sugars, in a stereoselective manner.

In the resting living state where, like in prepared Jello-O, water is structured in close association with cellular proteins, as well as ions and other molecules (e.g., potassium and ATP), and so glucose has a reduced solvency in the water inside the cell than in the water outside the cell.

So in the resting living state, and in the absence of insulin, in which the glucose adsorption sites become unexposed, glucose is found at higher concentrations in the blood than in the cell’s cytoplasm and adsorbed to intracellular proteins and enzymes.  This accounts for the unequal distribution of glucose across the plasma membrane (at least 4.5-fold higher concentrations outside the cell than inside the cell).   No pumps or transporters are required.

Given the conventional model, how does one account for this unequal distribution of glucose across the plasma membrane in the absence of insulin?  We could evoke the idea of a glucose pump of sorts.  Though this pump would have to operate bidirectionally; that is, at high rates when the glucose concentration in the blood is low; and at low rates when the glucose concentration in the blood is high, permitting glucose to move into the cell in droves.  Energy would be continuously used to maintain these pumps, and membrane proteins would provide the channels through which glucose could pass, via facilitated diffusion, into the cell. (There are too many issues with this scheme to consider it further at this point.)

When energy is used (for reasons that will be discussed in another post) the cell, which operates cooperatively as a unit, destabilizes a bit, and this allows glucose, as well as calcium, to move into the cell in droves.  Under the control of insulin, glucose adsorption sites on proteins and enzymes become exposed, and glucose is burned to replenish the ATP.  At the same time, carbon dioxide is produced, which functions to stabilize the resting living state and, via the Bohr effect, increases the efficiency with which oxygen is unloaded from the red blood cells, curtailing the production of lactate (and protons).  In this highly energized, resting living state, potassium is preferentially adsorbed to the ionized carboxylate groups on intracellular proteins. (This satisfactorily explains why the administration of glucose and insulin can uncomfortably lower blood potassium levels.)

Insulin, glucose, and oxygen are at the core of our resistance to stress, as Danny Roddy has pointed out, and now we have a firmer basis for understanding why this is.

Take for example what would happen, in terms of Dr. Ling’s association-induction hypothesis, in ischemia (low oxygen availability) of the heart, which represents an extreme case that offers up a glimpse of the provision of support by oxygen, glucose, insulin, and carbon dioxide.

Glycogen is a readily mobilizable fuel source in the heart that’s increasingly called upon as the blood supply of oxygen lessens.   Almost instantly, glycogen provides free glucose molecules, which is oxidized to generate ATP, and, once more, in an all-or-none manner, this electronically shifts proteins in a way that maintains the highly energized, resting living state in the face of stress. (Glycogen is replenished by fructose more efficiently than any other single nutrient.)

Over time, or if glucose and oxygen are not available, or available in inadequate amounts, the cell destabilizes, and as a result calcium, which is normally excluded due to its reduced solvency in structured cellular water, is permitted to move into the cell in droves (i.e., calcium overloading).   Cellular water is structured, to some extent—somewhere between the states of liquid water and solid ice—by the presence of ATP.1

Calcium overloading, via excessive excitation or from ATP depletion, over time, irreversibly transitions the cell into the so-called “dead state,” which is a concept—that is, being dead or alive—the conventional model (i.e., membrane-pump theory) has failed to adequately explain. (As I’ve said before ATP is synonymous with life.)

Oxygen is depleted as the cell becomes increasingly reliant on the use of fatty acids to generate ATP, accelerating the build up of lactate.  At the same time, the flux of glucose through the pyruvate dehydrogenase enzyme (PDH) complex, which carries out a key step in the metabolism of carbohydrates, essentially linking glycolysis to the citric acid cycle, 2 slows, and ultimately comes to a stop, further contributing to lactate buildup. 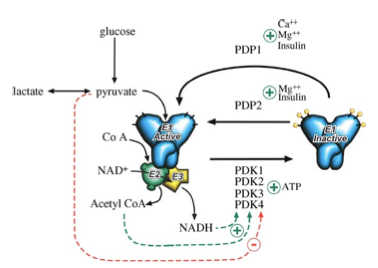 The buildup of toxic metabolites and the loss in cell structure leads to an impaired functioning of tissues and their death quickly ensues.  The provision of glucose, oxygen, and insulin, however, can short-circuit and reverse this vicious cycle.

The oral hypoglycemic drugs, like glipizide, are associated with an increased risk of cardiovascular death.  This warning was first made based on a long-term prospective study which was set up to evaluate the efficacy of four different (non-insulin) classes of oral diabetes drugs in the 1970s that included over 800 diabetics.  The persistent warped view of diabetes—that is, it is a disease of excessive blood sugar—has made it possible to continue the practice of treating diabetics for the sole purpose of "controlling blood glucose levels."

I’ve for the purpose of keeping this discussion as reader friendly and short as possible, simplified concepts as much as I could and left out the details, calculations, experiments that have led to some of the assumptions made herein.  I’ve also in this discussion left out the role of hormones, which adds another layer of complexity to the entire picture.

Thinking about physiology in terms of Dr. Ling’s conception of everything is hard to do (at least for me) and I’ve seen others try, but whether they realize it or not, they’ve oscillated back and forth between Dr. Ling’s model and the conventional model.

Nonetheless the argument of "context" is not applicable to my first "fact check" where I challenged Dr. Peat's position regarding the role insulin assumes in the blood glucose regulation.   Much of the work cited in defense of Dr. Peat is not only difficult to track down, but they can also by difficult to grasp and can be, at times, obscure to my conventionally-educated scientific mind.  Yet, my position regarding Dr. Peat's quote on the role of insulin in the post I've been alluding to hasn't been successfully refuted, even given Dr. Ling's conception of cell physiology, but I'm still interested in having a thoughtful discussion about it in the comments section.

1 others in the field have confirmed this quality of cellular water.
2 PDH complex carries out the metabolism of pyruvate to acetyl CoA, a central point in all of metabolism that intertwines the oxidation of protein, fat, and carbohydrate.