The red meat-carnitine study1 has made the rounds on the interwebz and many a blogger has had an opportunity to thoroughly deconstruct it, and, as usual, the data presented in the study did not, in any way, warrant the sensationalism and conclusion—that the consumption of red meat could lead to heart disease on the basis of its carnitine content—drawn by the press and media. (Though, the distinction that having “healthy” gut flora as opposed to normal or unhealthy would inhibit the conversion of carnitine to TMAO is lost on me.)

It was an easy one to swat down, but what was interesting to me was the fervor and vitriolic, yet laser sharp, scrutiny (and of course, all wrapped up with the obligatory pleas for critical thinking), with which this particular study was jumped on by the Paleo diet community in the defense of their sacred cow: red meat.

The inverse relationship between the quality assessment of a study and confirmation bias is ever present in science, and not necessarily wrong, but members of diet movements tend to take it to a level that ends up making me feel uncomfortable and nauseous.  It's simply human nature to scrutinize studies that tend to disagree with our preconceived beliefs more intensely than those that tend to agree with them, but this bias rears its ugly head so often and so blatantly in the Paleosphere so as to be reprehensible.

Don't get me wrong, the reporting of the aforementioned red meat study was abominable, and the critiques of it that I have had a chance to read have been clear, unequivocal, and spot on (especially this one).

The point that I'm trying to call attention to is that when we push, or try to push, our philosophy to its ultimate conclusion, we end up moving beyond the realm of science and into the land of religion, and so far as my observation and experience go, this is precisely what diet movements end up becoming.  We should strive to be as critical of the studies that agree with our beliefs as we are of the ones that don’t.

Skepticism is admirable, especially when applied to studies that get blown out of proportion, like this one.  But so too is the ability to think clearly, and we should be equally cautious as to not allow our skepticism carry us away to where we begin to willfully, recklessly, or unreasonably discredit evidence that contradicts our established beliefs.  However, when there are intellectual or financial interests, or issues of credibility at stake, guarding against this from happening becomes more and more difficult to do.  I'm an optimistic person, but the times are full of ominous signs and warnings with the introduction of things like this, and the rise of neurotic Internet diet "authorities."

Anyway, without further ado, per Charles Grashow's request, here is what I ate today.  I think I’m done eating. 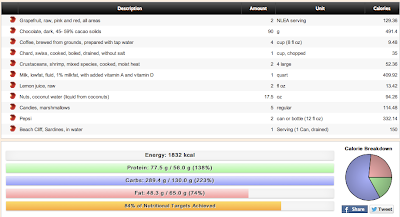 correction: there were mistakes on the first food list that are now fixed (I also drank another can of soda and ate a marshmallow) 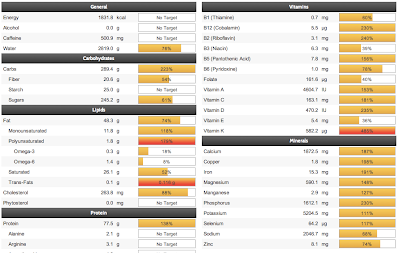