Although I have a rule for myself to not read consumer books about diet or health, despite not having much free time of late, I couldn’t resist the opportunity to speed-read through 80/10/10 by Dr. Douglas Graham recently.

I wasn’t able to see what all the fuss was about, knowing perfectly well how popular 80/10/10 is becoming.  There was but not one thing specifically insightful or interesting to report here.  Instead, despite what’s said by Dr. Graham to the contrary, I found the book to be a rehashing of what natural hygienists (like Dr. Emmet Densmore) had put forth in the past – only presented in a way to support the idea that humans had evolved to thrive on a vegan diet, mainly of fruit and, on average, no more than 10 percent of calories from fat and protein and no less than 80 percent of calories from carbohydrate.

But that’s not the purpose of this post; that is, to point out the errors, oversights, and half-truths in 80/10/10 – of which there are many.  It is instead to urge a recalibration of how we should think about diets and the arguments that are put forth for them, so as to avoid the financial, emotional, and bodily harm already incurred by those who were in desperate need of help, and so willing to try anything.

But what are the most optimal foods, let alone diet?  From my own experiences and observations, you’ll never know for sure until you test them on yourself.  Further, it’s important to know that all fruits are not created equal, and we aren’t permitted to deduce that just because a food is a fruit – and not an animal product, grain, starch, or whatever else – that said fruit is the healthiest option of all for every person, in every situation.

Herd mentality, however, is the M.O. of diet movements, in which certain beliefs, like the ones above, get belched out from one member’s mouth to another, repeatedly, absent of understanding or reflection on the matter.  Among contemporary fruitarians, beliefs like:


Suffice it to say for now, none of these statements are true and in some cases the opposite is true (e.g., osteoporosis results from replacing animal protein with vegetable protein).  Anyone who says otherwise is utterly ignorant of all the data that exist on the topic.

Although making the case for fruit being the most natural food for man does have validity – more so than does meat eating in my opinion – eating a gut-busting 12 bananas in one shot or chomping away on a jaw-cramping 2 heads of romaine lettuce in a salad are some of the least natural and most unusual of all things passed off as natural and healthy I have ever come across.

I mention this not by way of criticism, but because there are people who do appear to do well on 80/10/10 and fruitarianism long-term; that is, for a few years and sometimes even for decades (and I do not see why they would lie about this).  I merely mean that the assumption that a diet works if a person does well on it does not allow for the following:


It’s easy to be lured into this diet and lifestyle – especially if you watch one case after another of the dramatic transformational stories on YouTube, of which, actually, there aren’t that many cases.  Unfortunately, presented in this way they tend to have the most dramatic impact on us.  The realities, however, fall short of the claims and promises.  Just read about the cases in which the diet abysmally failed (like here).  Again, I ask, what did the diet and lifestyle look like before 80/10/10?

Imposing a diet on others, just because it has worked for you, is a tactic employed by the loudest and most prominent leaders of diet movements – 80/10/10 is no exception.  In fact, 80/10/10 is probably the most egregious and glaring example of this.  Testimonials (i.e., “look at how well the diet worked for me”) do not count as proof that a diet will work for every person who tries it.

By the same illogical token, I wouldn’t resist taking the occasion to say that my grandpa, who eats very limited amounts of fruit but does eat meat and other animal-derived foods, to me, looks way healthier and more youthful than Dr. Graham does, who is about 20 years his junior.

Of course, I would like to see averages – of the people who succeed on the diet and the people who don’t.  Putting to rest, once and for all, whether certain people have much better, or even worse, responses to the diet.  This would be very easy to do.  Until then, the diet cannot be perceived as the panacea that we are led, or forced, to believe it is, by people who have no real education or training in nutrition or science whatsoever.

Notwithstanding all this, there are 5 aspects of 80/10/10 (and, in general, fruitarianism) that I thought were worthy of listing here.  Having said all that’s occurred to me, and knowing that my readers would be served by a practical list of suggestions, I think the following is an appropriate place to end this post.

1In other words, the simple act of adopting a new diet and lifestyle could have activated, or primed, self-healing mechanisms (for real).

On a personal note, it looks like my pup’s days are coming to an end.  He was the most disobedient dog and tough as nails on the outside, but on the inside, shy and unconfident with an intense fear of abandonment and I never gave up on him.  I was so lucky to find a picture that taken on the first day I got him. 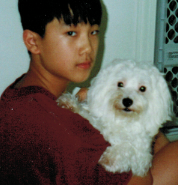